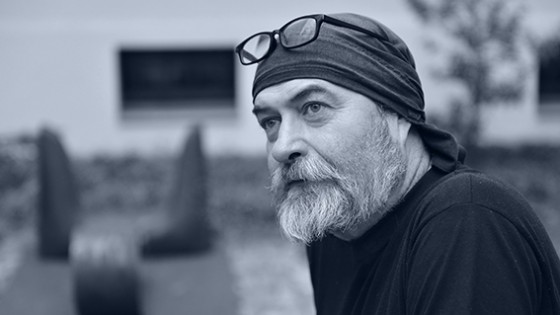 Born in 1963, Luděk Marks belongs to a generation closely linked to the second wave of the Czech underground, which went hand in hand with the Czech decadence movement. His work has appeared in the anthologies Už na to seru,protože to mám za pár [r Fuck This, I'm Gone in Five] (1985, edited by Andrej Stankovič) and 9× Kontra, Almanach básníků pražského undergroundu [9× Contra, a Poetry Almanac of the Prague Underground.] Marks has worked as an editor for the Vokno magazine and his poetry has been made into
lyrics by musicians such as David Koller or Vladimír Mišík. He has authored two collections: Stín svícnu [The Shadow of the Candlestick] (1994) and Po hadí kůži [On Snakeskin] (2017). He has also documented several archaeological findings and has contributed to a number of academic publications.